Read an excerpt from the introduction of the “Images of America: Palos Park” book, by Jeannine Kacmar, the Palos Park Public Library, and the Village of Palos Park:
“… the Cook County Forest Preserves that surround the community of Palos Park on three sides have insulated Palos Park from the suburban sprawl giving it a timeless look. Geography played an important role in the settling and shaping of Palos Park. Glaciers left behind forested ravines, fresh water springs, and fertile farmland which became home to the Potawatomi and other Native American tribes before the French explorers passed through the Palos area. Ruins of French earthworks were found on the Theodore Lucas farm and French coins and Native American pottery pieces were found on other farms in the area. After the defeat of Sauk Chief Black Hawk in 1832, the government offered land grants to settlers and in 1834 the Paddock family was the first of the white Europeans to settle in Palos closely followed by John D. McCord, Samuel Mahaffay, Adam Boyce, George Pettijohn, Robert Lucas, and others. Some of the early settlers built log houses and cut timber to load on canal barges for the growing city of Chicago to be used for construction or fuel. Other settlers scratched out a place in the hills or the fertile flatland in the south of the township and raised cattle, chickens, pigs, goats, farmed land with a horse and plow, and grew all the food they would need to survive in the remote area of early Palos. The construction of the I&M Canal in 1848 would bring Irish and German immigrant workers to the area. The population of early settlers would consist of farmers, laborers, blacksmiths and wood cutters. In 1850, Palos Township was named Trenton but was changed to “Palos” by Melachan A. Powell, the first postmaster. Powell’s cabin also housed the first school in 1838. By the late 1880s, there would be six one-room framed school houses in Palos Township. 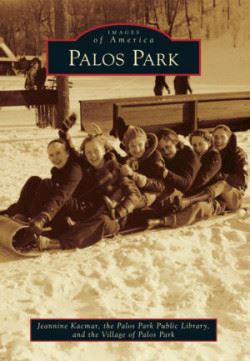 The arrival of the Wabash Railroad in the 1890s opened the remote rural community of Palos to new people and a new purpose. With 8 to 12 trains arriving daily from Chicago to Palos, residents had a new accessibility to the city and its opportunities. Residents were not strictly dependent on the land for their living but could travel to the city for work creating a change from their primarily agrarian lifestyle. Farmers began subdividing their land for development. Chicago Sharpshooter’s Association took the train to Palos in 1894 and purchased 39 acres across from the train depot for $16,500 to build the first and largest recreational development in Palos Park. The Sharpshooter’s Club was the most elaborate and expensive club in the country at the time when sharpshooting competitions were one of the era’s biggest sports.

As the population grew, the community felt the need for a local government and in 1914 the Village of Palos Park was incorporated as a commission form of government. Newspaper editor Ballard Dunn became the first mayor and Ray Bumstead, J.W. Mahaffay, Bruce Summers, and Edward Tourtelot became the first Village Commissioners. Their Village Aid Plan ushered in new and improved roads, and eventually electricity, indoor plumbing, and telephones. The Village officials also recognized the value of the natural beauty of the land and created laws requiring one acre residential lots and limited the industrial and business development to the Wabash Railroad site…

Palos Park remains a small, mostly residential village of over 4800 residents cushioned from the bustle of life in the larger neighboring suburbs and the city by the green belt of forest preserves. It is a village defined by the independent spirit of those who settled the land and worked together to build a community with a shared sense of pride.”


The Village of Palos Park has become a Certified Local Government, historic properties within the Village are eligible for consideration for listing on the National Register of Historic Places. This distinction offers many benefits to the owners of historic property and to the Village as a whole. Learn more….
Bill Payment Options
Agendas &
Minutes
Village Code
FOIA
Employment
Report a
Concern
Choose Palos Park